We are ringing in 2020 with a banner year of features and documentaries that showcase what Focus Features does best. On display, of course, will be Focus’ trademark display of new cinematic talents, sumptuous lliterary adaptations, and world-class directors. This year, we also extend our commitment to recognizing all voices. Our first four features, for example, are female stories all written and directed by women.

Whatever else 2020 has in store for us, there are some great films to look forward to. 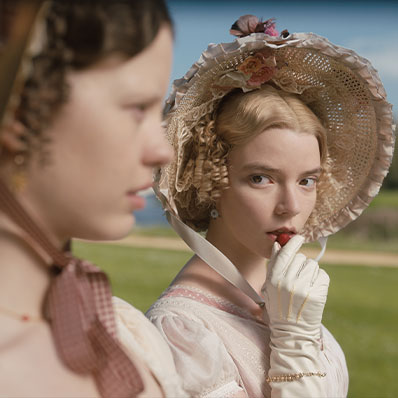 The official trailer for EMMA

Fans of Pride & Prejudice will be happy to hear about Autumn de Wilde’s sparkling adaptation of Jane Austen’s EMMA. With a screenplay by Eleanor Catton (whose novel The Luminaries won the 2013 Man Booker prize), EMMA. stars Anya Taylor-Joy as the title character and Johnny Flynn as the elusive, eligible George Knightley. As an innovative photographer and music video director, de Wilde brings her unique visual flair to a beloved literary classic, along with the help of a formidable cast including Bill Nighy, Miranda Hart, and Josh O'Connor.

Written and directed by Eliza Hittman, Never Rarely Sometimes Always tells the story of two teenage girls, Autumn (Sidney Flanigan) and her cousin Skylar (Talia Ryder), who leave rural Pennsylvania to hopefully create a new life in New York City. Never Rarely Sometimes Always is the latest from an astonishing filmmaker that Indiewire desribes has having been "steadily crafting intimate, shot-on-film, coming-of-age stories for more than a decade.” Her previous feature Beach Rats won Hittman the Dramatic Directing Award at the 2017 Sundance Film Festival. With her intimate style and compassionate storytelling, Hittman, according to The Wrap, “has established herself as one of the premier chroniclers of wayward youth.”

With Promising Young Woman, writer/director Emerald Fennell brings her audacious vision to the screen with this high-octane tale of Cassie (Carey Mulligan), a promising young woman whose life is derailed before she gets to fulfill her destiny. Whip-snap smart and terribly underestimated, Cassie engineers a way to get even with those who took away her once promising future. Although Fennell is making her directorial debut, she has already shone both as an actor (Call The Midwife) and a writer (for which she was nominated for an Emmy® for her work on Killing Eve). For Promising Young Woman, Fennel has attracted a stellar cast, including, Laverne Cox, Alison Brie, Connie Britton, Jennifer Coolidge, Max Greenfield, Christopher Mintz-Plasse, and Molly Shannon.

Writer/director Thomas Bezucha brings together two legendary actors in Let Him Go, a powerful drama that explores the limits and meaning of family. Based on Larry Watson’s novel of the same name, Let Him Go follows retired sheriff George Blackledge (Kevin Costner) and his wife Margaret (Diane Lane) as they leave their Montana ranch to rescue their young grandson from the clutches of a dangerous family living off the grid in the Dakotas. Bezucha, who has demonstrated his keen sense of family dynamics in comedies like The Family Stone, gets to explore its more dramatic edge here.

Edgar Wright, the mastermind behind the Cornetto Trilogy (Shaun of the Dead, Hot Fuzz, and The World's End), returns to the screen with his psychological horror film Last Night in Soho. We can’t wait to see what Wright comes up with, especially with such a talented cast led by Thomasin McKenzie, Anya Taylor-Joy, and Matt Smith.

Tom McCarthy, whose journalistic thriller Spotlight won him a Best Original Screenplay Academy Award® as well as Best Directing nod, is bringing his skill and imagination to this new thriller.

In addition, expect the following films:

Luke Greenfield’s comedy Half Brothers blends together remarkable talents from both the US and Mexico. After discovering he has an American half-brother (Connor Del Rio), a Mexican aviation executive (Luis Gerardo Mendez) must join his new, very different sibling to retrace the path their father took as an immigrant to come to the United States from Mexico.

In a yet-unnamed documentary, filmmaker Dawn Porter is turning her cameras on renown White House photographer Pete Souza, whose intimate and thoughtful snapshots captured the private and political worlds of President Barack Obama and Ronald Reagan for the world to see.

And there is more to come.